In his book Eat Right 4 Your Type, Dr. D’Adamo first introduced readers to the concept of Secretors/Non-secretors. By now you are familiar with the concept that your ABO blood type is controlled by your genetics. The gene coding for your blood type lies on chromosome 9q34. However, a separate gene (called FUT2) actually interacts with your blood type gene, and determine your ability to secrete your blood type antigens into body fluids and tissues.

With respect to the ABO blood types, it is very difficult to state that one type is more advantageous than another. Each blood type has its own strengths and characteristic weaknesses. However, this does not appear to be the case with the Secretor gene. As a generality, being a Non-secretor (based on all of the available information) does actually appear to be a potential health disadvantage. At a very basic level, being able to secrete blood type into your saliva, mucus, etc. allows for an added degree of protection against the environment, particularly with respect to microorganisms and lectins.

An additional advantage of being a Secretor might be a generalized tendency to promote a stabilized, blood-type friendly intestinal bacterial ecosystem. Many of the friendly (probiotic) bacteria in your digestive system actually use your blood type as one of their preferential foods. Since Secretors have a steady supply of blood type in the mucus that lines the digestive tract; their bacteria have a much more constant food supply.

Metabolic Differences Between Secretors and Non-Secretors

Similar to the ABO blood types, it appears additional genetic information must be linked to the Secretor gene, because predictable trends in non-blood type aspects of physiology have a close association with Secretor/Non-secretor status. Aspects of physiology such as the relative activity of an enzyme called intestinal alkaline phosphatase; propensities toward clotting, reliability of some tumor markers, and generalized performance of your immune system have predictable trends depending upon your Secretor status.

As was mentioned in Eat Right 4 Your Type, blood type impacts the clotting ability to a significant degree. In fact, it has been estimated that a significant fraction (30%) of the genetically determined variance in plasma concentration of the von Willebrand factor (vWf) clotting factor is directly related to ABO blood type. As a rule, it is blood group O individuals who have the lowest amount of this clotting factor.

Secretors have the slowest clotting while Non-secretors have shorter bleeding times and a tendency towards higher levels of the clotting factor VIII and vWf. ABO and Secretor genetics actually further interact to influence blood viscosity. In essence what this means is that an A Non-secretor will be at the far end of the spectrum with the slowest bleeding times, thickest blood viscosity, and the most probability to have high platelet aggregation. On the other end on the continuum will be O Secretors, who will have the longest bleeding time, thinnest blood, and least tendency for platelet aggregation. Because of this, Non-secretors (especially the type A’s) tend to be at the highest risk for future atherothrombotic and heart disease. 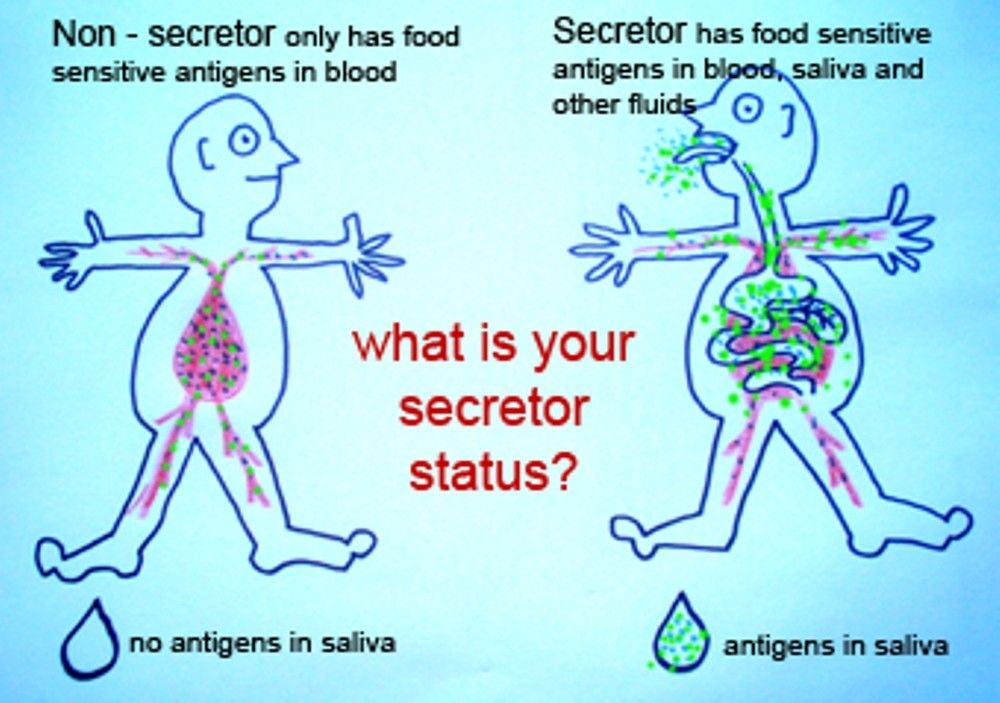 Disease Susceptibility among Secretors and Non-secretors:

As a general rule, a higher intensity of oral disease is found among Non-secretors. This includes dysplasia (precancerous changes to the tissue) and an increase in cavities. Statistically speaking, blood type A Secretors have the lowest number of cavities.

Non-secretors also tend to have more digestive problems. Several studies have indicated that Non-secretors have a significantly higher rate of duodenal and peptic ulcers. Non-secretors are also less resistant to infection by Helicobacter pylori (a microbe associated with ulcers). It appears that this organism can colonize more readily and generate more inflammation in individual’s incapable of secreting their blood type into the digestive tract.

Among coal miners, asthma was significantly related to Non-secretor phenotype. Secretors also appear to receive a degree of protection against some of the deleterious effects of cigarette smoking. Evidence suggests that the ability to secrete ABO blood type antigens might decrease the risk of Chronic Obstructive Pulmonary Disease (COPD).

Being a Non-secretor also offers a slight increase risk for having a problem with habitual snoring.

Non-secretors appear to have an increase in the prevalence of a variety of autoimmune diseases including ankylosing spondylitis, reactive arthritis, psoriatic arthropathy, Sjogren’s syndrome, multiple schlerosis, and Grave’s disease.

Several different researchers have noted a connection between a metabolic syndrome called “Syndrome X” and Non-secretor blood types. Syndrome X is a clustering of metabolic problems comprised of insulin resistance (your cells do not respond effectively to the insulin that you create), elevated plasma glucose (high blood sugar), lipid regulation problems (elevated triglycerides, increased small low-density lipoproteins, and decreased high-density lipoproteins), high blood pressure, a prothrombic state (tendency to clotting), and obesity (especially central obesity or a predisposition to gaining weight in the abdomen). This cluster of metabolic disorders seem to interact to promote the development of diabetes (adult onset type II), atherosclerosis, and cardiovascular disease. And while insulin resistance might lie at the heart of the problem, all of these metabolic disorders appear to contribute to health problems.

Alcoholism has been associated with the Non-secretor blood type. On the positive side, alcohol consumption appears to exert a protective effect on lung function and to lower the risk of heart disease more in Non-secretors than in Secretors. The key principle with the use of alcohol is for Non-secretors (and everybody actually) is moderation.

Non-secretors are at a greater risk for recurrent UTI’s, have a greater tendency to increased inflammation, and are much more likely to develop renal scars. Being a blood type Secretor on the other hand offers a degree of protection; cutting your risk of recurrent UTI’s by greater than 50% and dramatically decreasing the likelihood you will have renal scars develop.

Based upon this tendency of Non-secretor saliva to not only fail to prevent attachment of Candida., but maybe actually promote the binding of Candida to your tissue, we would expect that research would show higher tendency to Candida problems among Non-secretors. This is what we find to be true. Non-secretors are much more likely to be carriers of Candida and to have problems with persistent infections. Blood type O Non-secretors might be the most affected of the Non-secretor blood types, since Candida also appears to have an easier time colonizing (attaching to) the blood type O antigen.

Secretors are known to have higher levels of IgG and IgA antibodies. The lack of IgA antibodies perhaps explains the link between non-secretor status and an increased frequency of heart valve problems secondary to bacteria infection. Because IgA functions much like the way a rampart or palisade wall protects a town from invasion, most if not all non-secretors have problems with gut permiability (“leaky gut”).

I hope you can begin to appreciate that having information about your Secretor/Non-secretor status might be a valuable piece of health information. While, unfortunately, the news for Non-secretors is not as positive, it is better to have information. With information comes knowledge. And with knowledge, comes the ability to intervene.

Look for further information on Secretor/Non-secretor blood type connection in his book Live Right 4 Your Type. In addition to allowing important diet refinements, knowing your secretor status can help you use nutritional supplements more effectively and intelligently while adding to your awareness of illness and metabolic dysfunction you may be prone to because of your secretor genetics.

Previously, secretor status could only be determined by select labs using sophisticated forensic techniques. Now North American Pharmacal has made available this important test directly available to the general public using a simple saliva sample to perform the determination.

Importance of Secretor Status
Monday, May 14, 2018
★★★★★
“ This was my first “live blood analysis” experience. After talking to several of my friends who have had this done, they did not have the same explanation experience that I did”
- Ken Fraser

Importance of Secretor Status
Monday, May 14, 2018
★★★★★
“ I was very ill after having a bacteria in my stomach, and then two weeks of several antibiotics a few times a day only compounded my problems.”
- Mark and Candace Reutlinger

Natural Health News You Won't Get Anywhere Else

Get the latest health news, recipes,
nutrition and fitness tips, and beauty DIYs
delivered straight to your inbox

You have successfully subscribed to the newsletter

There was an error while trying to send your request. Please try again.